This case study reveals how BigPay, a now-famous startup that belongs to AirAsia has benefitted from working with SmartDev’s team of remote developers in Vietnam.

SmartDev is proud to have worked with BigPay to create a powerful and convenient digital banking app. Used by hundreds of thousands of people in Southeast Asia, BigPay gives users access to budgeting tools, secures payments, and provides top-quality banking services with the convenience of a user-friendly app.

BigPay has just recently raised a whopping $100 million USD in investment from South Korea’s SKGroup conglomerate, and the service aims to become the biggest challenger bank in Southeast Asia. BigPay’s goal is to lead ASEAN nations to the future of online banking, and the company is making excellent progress along the way. In the summer of 2021, BigPay announced its application for a digital banking license in Malaysia. Things are moving quickly, and in a good way.

Currently, BigPay is available Singapore and Malaysia, and Thailand is next in the bank’s sights according to co-founder Salim Dhanani.

As BigPay is backed by the Malaysian AirAsia Group, it’s already well-versed in the region’s financial services. Fintech offerings from BigPay are one way ASEAN countries can empower users to bank more freely. For example, BigPay allows remittances from any foreign country to Malaysia, Singapore, Thailand, and Indonesia via a favorable exchange rate.

BigPay also allows international money transfers from Malaysia for low rates. In addition, users can add money to a prepaid debit card — the BigPay Card — that can be used anywhere Visa or Mastercard are accepted. The card can be topped up from any account linked to BigPay via credit card, debit card, or bank transfer.

When financial products are available to everyone, the entire region benefits. Startups and individuals can access more capital, leading to further trends of financial growth. All around, it’s good news.

SmartDev and the BigPay App

BigPay chose SmartDev to build their mobile app. Because it’s a fintech app, the user experience needed to be both easy to navigate and secure.

Because it continuously conducts payments, transfers, and many more financial services, the backend of the app had to be flawless and scalable in real-time communication.

SmartDev used a team of 10 developers, including Android, iOS, and Java specialists to make the app, which has been a big hit, with overwhelmingly positive reviews. The project took several months, and the app is now used by hundreds of thousands of people across the region.

SmartDev is very proud of this collaboration and pleased to be able to improve the lives of many more people in the future via the app. The whole world is looking to apps like this for the future of banking — the more convenient, the better. Each new system will have to have an extremely robust backend and a user-friendly front end, which BigPay features — in a big way.

Results: SmartDev has delivered an app that is currently used by hundreds of thousands of people in Southeast Asia. The app has a 4+ rating on the App Store and Play Store and users are delighted with it. 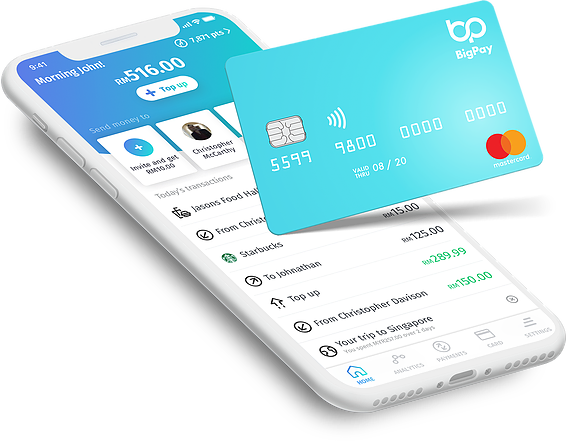 Manage Cookie Consent
To provide the best experiences, we use technologies like cookies to store and/or access device information. Consenting to these technologies will allow us to process data such as browsing behavior or unique IDs on this site. Not consenting or withdrawing consent, may adversely affect certain features and functions.
Manage options Manage services Manage vendors Read more about these purposes
View preferences
{title} {title} {title}